A downloadable mod for Windows

This unreal mod of the shooter game template is a gift for my friend and fellow designer, Josue Benavidez, to honor one of his favorite bugs from back in his QA days.

The game is basic deathmatch, but when you die, instead of ragdolling, your corpse just keeps standing upright. As the kills rack up, you can stand still among them to hide. (but, don't sit and hide forever, or else you'll die).

Verticorpse is online MP only, and you'll have to travel back in time to 2003 and wrangle port forwarding and public ip addresses to play, but I did sneak in a very rough lobby, just for you. The ideal player count is 4-6 players.

I will try and host a bunch of games this week so if you want to jump in on them, follow me on twitter (@Wertle) and keep an eye out for game announcements.

Prof Brown - design and whatnot

The reason the lighting is terrible is because I hired Teddy Diefenbach as my lighter and then fired him immediately when he said he was going to turn the bloom up to 11. So you can blame him.

Thank you to everyone who helped me playtest!

If you enjoyed this game, let me know on Twitter! @Wertle 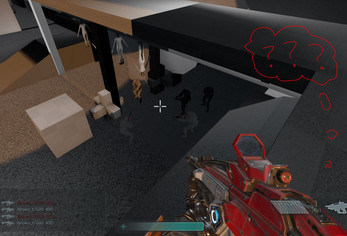